You Are a Beacon to Billions 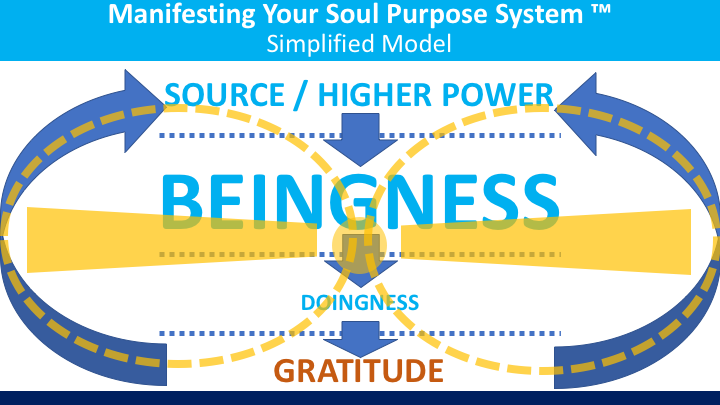 Two weeks ago, I simplified the Soul Purpose SystemTM and emphasized that when you turn on the switch of gratitude, something magical happens, and you complete the positive energy circuit with source and grow brighter and brighter in your beacon to the world. Then, last week I talked about how your life story informs your soul purpose. Assuming you looked at and took the time to meditate on these thoughts and are in touch with your soul purpose, then you'll realize two primary things.

If you're not in touch with these two aspects of your being, and for some people, it takes a couple tries to really get connected, then I would say rinse and repeat the last two posts until you get connected to what your soul purpose is. Then, come back and start here again.

What do I mean by this statement of you are a Beacon to BillionsTM? What I mean is that you are Powerful Beyond Measure. Remember, that is the title of this blog? You have the potential to reach billions of people with your gifts in order to light up their soul purpose and their gifts to the world if, and it's a BIG if, you choose to connect to and share your gifts with the world. A lot of people don't do that in their lifetime.

When I first coined this phrase, Beacon to BillionsTM, some people looked at me and said, "That's too big, Peter. That's not realistic." However, for me, it resonated as a true statement. I dug a little deeper to find some evidence of this statement, that we could reach billions, and here's what I found. 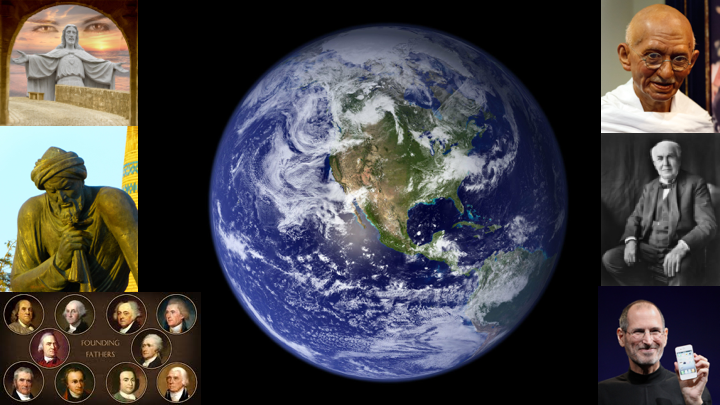 Let's first look at a couple of examples of people or groups of people that have reached billions with their gifts.

When I give you these examples, you might be thinking, "Come on, Peter. I'm no Jesus or Muhammad, Gandhi, Thomas Edison, or Steve Jobs." However, what is different today is that we have a new medium for reaching billions that has not been available until this century and not until really the last 10 years. I trust you know what I'm talking about. 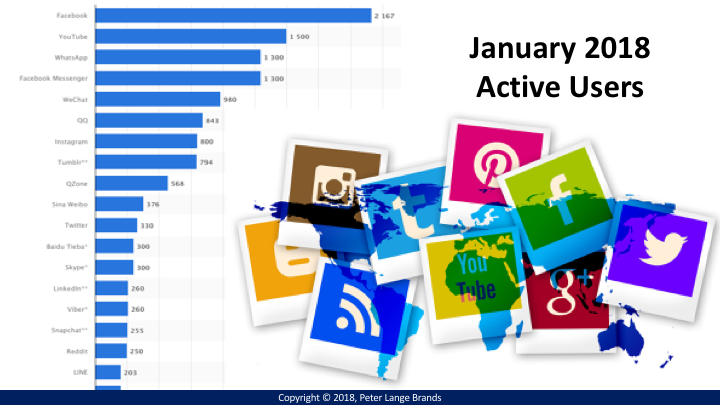 I'm talking about social media platforms. As you can see from the statistics above from January 2018 active users counts:

These platforms today are reaching billions of people.

Now you might be saying, "Come on. Those are billions of active users, but how can I reach billions of people on those platforms?" In some sense, it's already happening. 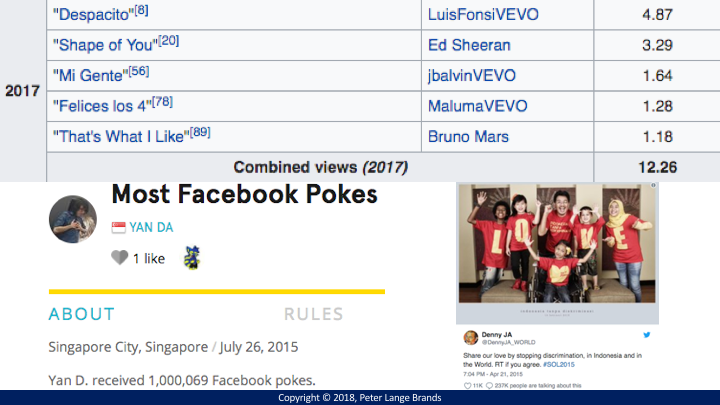 Above are some songs from 2017, and these are combined views in 2017 for those music videos on YouTube. Now, maybe they didn't quite reach a billion people, but I have to say the top one there at 4.87, almost 5 billion views, probably did reach a billion people in the world. Ed Sheeran, a close second with almost 3.3 billion in 2017. These big music videos are reaching billions of people. Then you say, "But I'm not a musician." Well, I found this guy over in Singapore who received over a billion Facebook pokes. Now, who's Yan Da? I have no idea, but the guy's got over a billion Facebook pokes and maybe that's because he sat there on the computer and did 800 million of them. My point is the technology is there to reach billions of people.

Then I looked at Twitter. There's nobody that has quite a billion Twitter retweets, but I found the tweet above that I thought was really cool. They have 237K retweets, nowhere near a billion, but I love their message. It's a platform for getting these kinds of messages out in the world. You may still be saying something like, "Come on, Peter. I get social media, but I'm not Gandhi, Edison, or even Ed Sheeran." Of course, as this blog's title is Powerful Beyond Measure, my response would be to you "Actually, who are you not to be like one of these guys?" 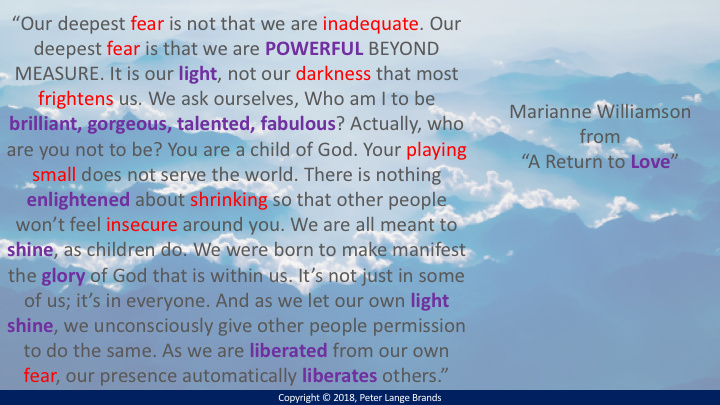 I think we all have it in us. We all have the ability to "make manifest the glory of God that is within us. It's not just in some of us; it's in everyone. As we let our own light shine, we unconsciously give other people permission to do the same." (Marianne WIlliamson) Go out and make it happen! 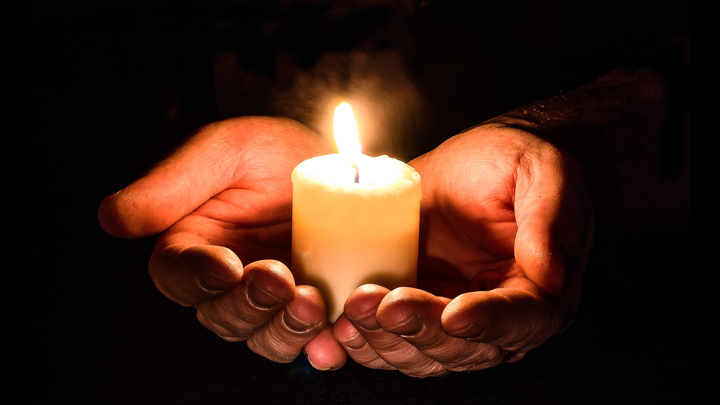 It may start in a small way. You may just be a small candlelight in the world, and you're not going to instantaneously touch the hearts and souls of billions of people, but you can start with a small flame that reaches hundreds. 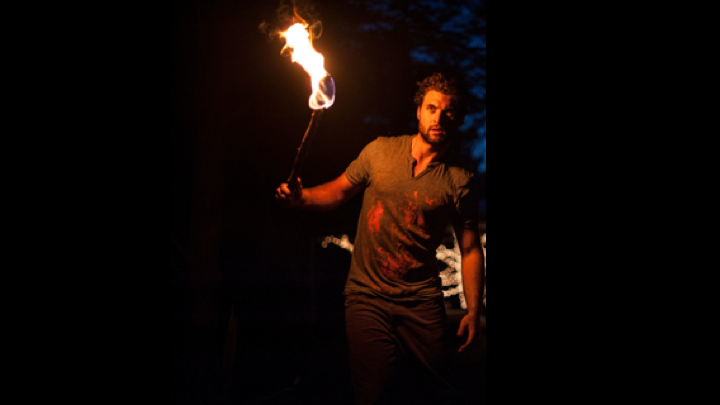 Then, as your flame grows into a torch, you might reach thousands as a torchbearer for whatever your gifts are. 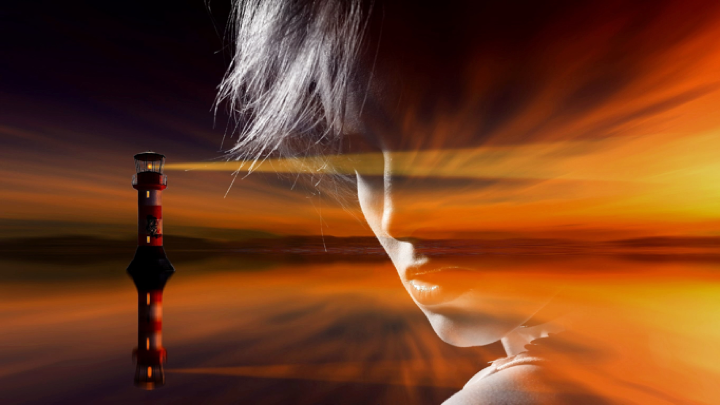 Then, as it grows bigger, some are fortunate that their gifts reach millions in their lifetime, but you have to get started now with what you're being guided to be in terms of your soul purpose. 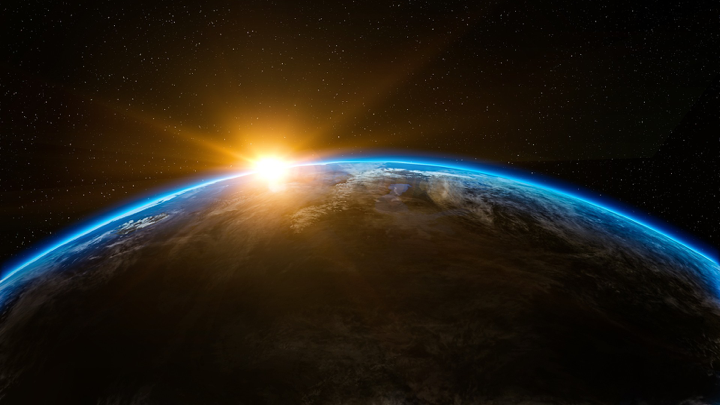 If you're really lucky in your lifetime, you might be like the North Star or the sun, a light that reaches billions of people every day. You just never know until you get started.

These last four images were all about bringing light into the darkness that surrounds us every day. I'm currently working on a project with a group of people, and our goal is to ultimately reach over a billion people with our light. Will we do it? I think so. Stand by for an update, but you need to begin. Begin now to be guided to be the Beacon to BillionsTM that you've been called to be through your gifts and your talents for the world.

Again, share the blog. I'll be back next week. Thanks.